The Labor Department reported that employers added 661,000 new jobs in September, which is fewer than half the jobs added in August and about a third of those added in July. This trend indicates a slowdown in hiring. If the hiring rate remains at current levels, it will take 16 months to recover the jobs lost in March and April; however, it will take even longer if the hiring rate continues to slow.

As of September 26, 12.5 million workers remained unemployed—an unemployment rate of 7.9%. More than 800,000 newly unemployed workers are filing initial unemployment claims each week, and 11.8 million are continuing to collect unemployment (see figure below). 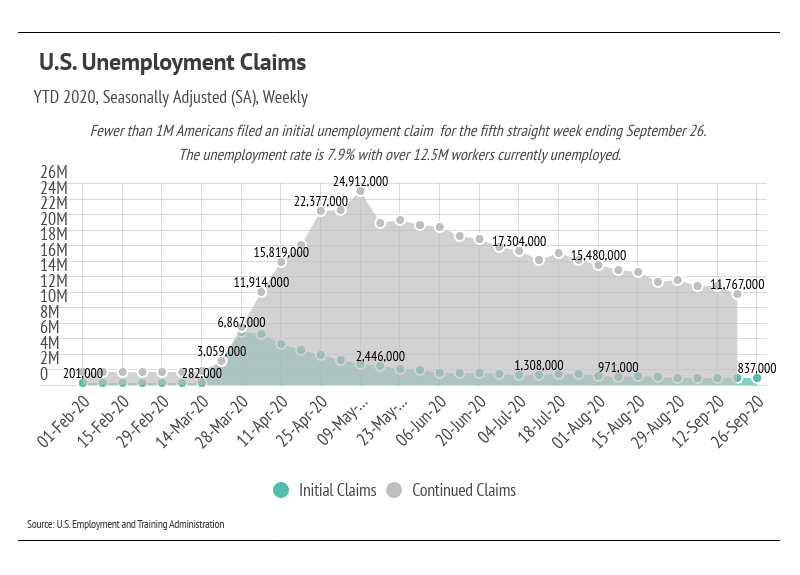 Despite high rates of unemployment and an economic downturn, housing has held onto its value, particularly in the San Francisco Bay Area. Pandemic-induced economic impacts disproportionately affect workers without college degrees—individuals who were likely not in the housing market in the first place. And, as the Bay Area employs a high number of skilled workers with college degrees, its unemployment rate is lower than other areas of the United States, and its housing market is holding strong. Now, more than ever, the more highly skilled and educated a person is, the more likely they will be able to afford a home.

As we enter autumn, we are uncertain whether or not federal stimulus aid for individuals and businesses affected by COVID will come before or after the election. The immediate risks to the housing market, however, are fairly low. The Mortgage Bankers Association’s (MBA) Research Institute for Housing America (RIHA) reports that, for the most part, homeowners were able to continue their mortgage payments; however, renters struggled to pay rent. This should come as no surprise; only 6% of homeowners reported collecting unemployment by the end of June, while the percentage of renters collecting unemployment was more than double that.

Despite our struggling economy, the housing market has maintained its value, and homeowners have navigated this uncertain time well.