The National Bureau of Economic Research officially deemed February 2020 the most recent U.S. economic peak ending the decade-long expansionary economic cycle, which means we are in a recession until we begin another growth cycle. Unlike the last recession between 2007 and 2009, which was heavily tied to the housing market, the current COVID-induced recession is less likely to affect the housing market, at least in the short-term.

During the second quarter of 2020, home prices rose nationally while GDP—the broadest measure of goods and services produced—dropped 9.5% quarter-over-quarter. GDP and the housing market usually trend together over time. The connection between the two is quite simple: overall personal income should rise as GDP increases, thereby accumulating enough wealth to purchase a home.

Because demand for housing still outpaces supply, the negative GDP figure will likely not significantly impact housing unless it persists through the next year. Perhaps the more pertinent news regarding GDP is that the federal government offset the drop in production and spending through COVID-19 relief and stimulus measures. Specifically, the recipients of the $600 per week federal unemployment supplement, which ended July 31, largely infused that money back into the economy. 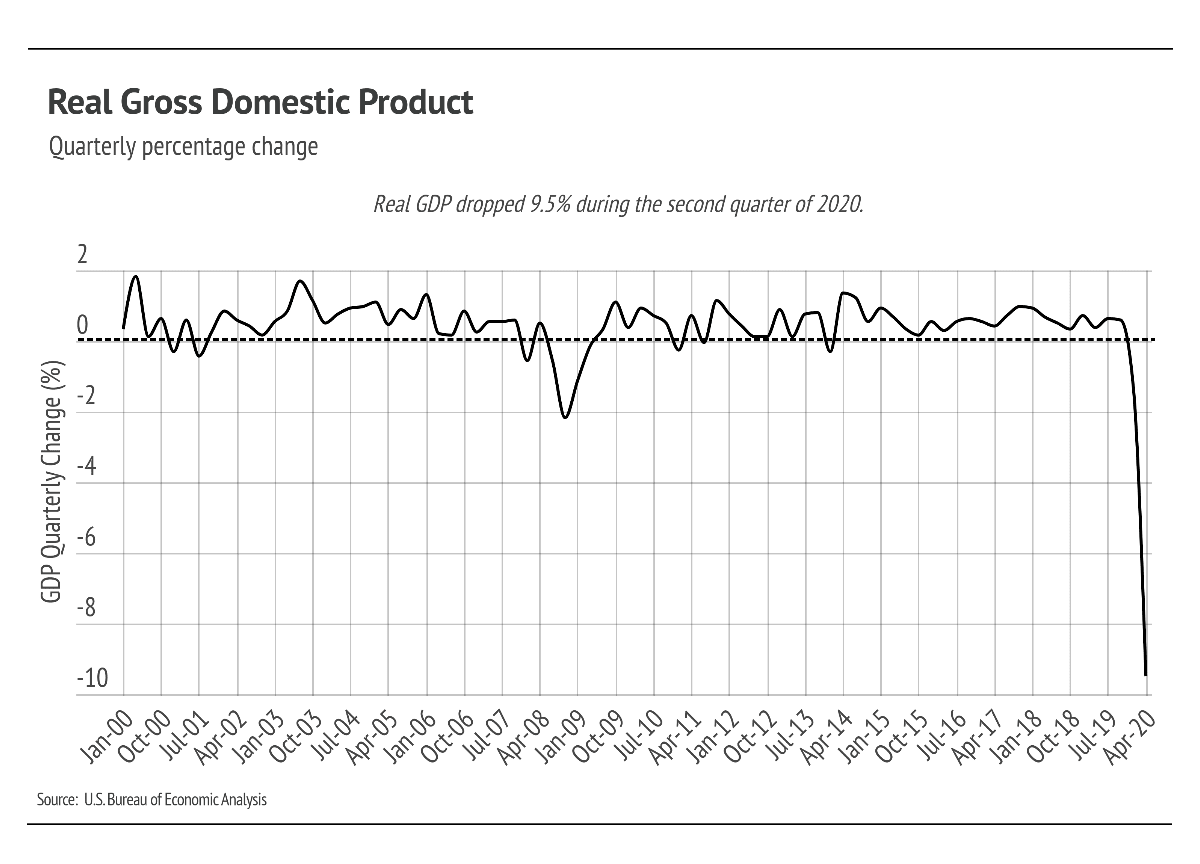 The number of continued unemployment claims, those that continue collecting unemployment after their initial claim, has not dropped as precipitously as was hoped. As mentioned in previous newsletters, the initial projections for when the virus would be under control was mid-July, which did not come to pass. As the United States navigates its way through its pandemic response, 16 million unemployed workers continue to collect unemployment benefits. Economists estimate that the actual number of unemployed workers is around 25 million. 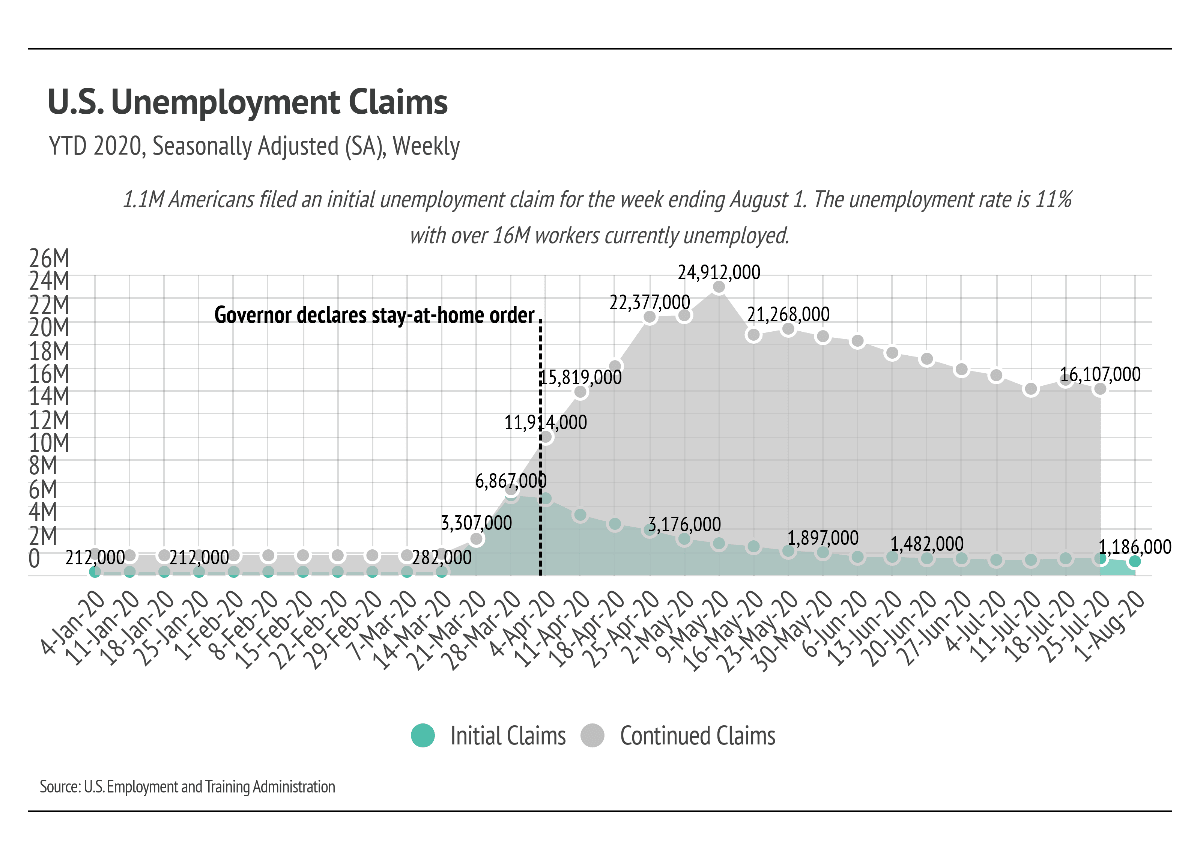 Unemployment claims continue to cause some of the biggest concerns about the overall economy. If people continue to collect unemployment rather than going back to work, those cases will turn into permanent, rather than temporary, job losses. Moreover, many businesses face permanent closure as time passes, which permanently reduces the total number of jobs available.

Fewer jobs amid already high unemployment rates could lead to a long road to economic recovery and evictions. In the short-term, rental properties may experience a squeeze in profits. As we continue to monitor the market, we will look for unusual upticks in rental properties coming to market, suggesting this trend is underway.

On the other hand, the pandemic has left many with more money than usual as their personal spending has dropped considerably. Those interested and able to buy a home are in the lowest interest rate environment in history. Freddie Mac reports that the interest rate on a 30-year fixed mortgage is at 2.88%. This is the first time the rate has dropped below 3%.

As we have discussed in previous newsletters, the affordability of a home increases (or decreases) significantly with each percentage of interest. A mortgage loan for a median-priced home at the January 2020 rate of 3.72% costs $460 per month more than a loan at 2.88%, amounting to $165,000 over the life of the loan. As a result, we have seen a boom in refinancing, which we expect to continue for homeowners who do not wish to move. For buyers (or refinancers), this could be the lowest interest rate they will experience in their lifetime and an excellent time to execute the purchase of a home. 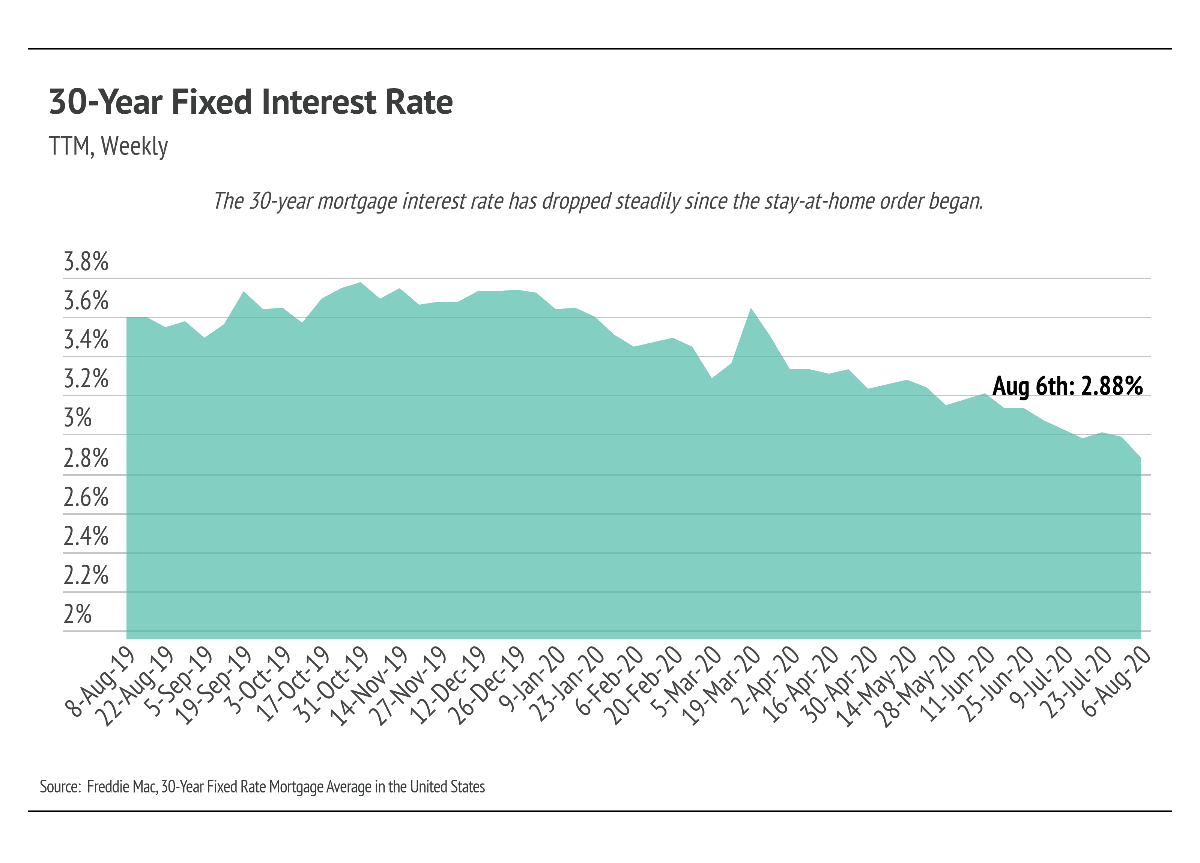